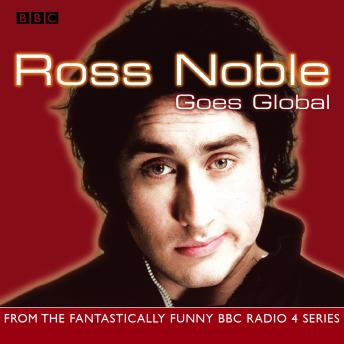 Download or Stream instantly more than 55,000 audiobooks.
Listen to "Ross Noble Goes Global" on your iOS and Android device.

A brilliant new BBC Radio 4 series of comedy travelogues presented by award-winning stand-up and ‘Just a Minute’ regular, Ross Noble. Perrier Award nominee Ross Noble has received huge critical acclaim and become known as an exciting and original talent in the UK. Now he takes his show worldwide, to destinations as diverse as Shanghai, South Africa, Ireland and Singapore. In Shanghai he marvels at the wonders of a thousand pensioners exercising in a park, visits a Buddhist temple and discovers that he is allergic to incense. Touring South Africa, he fails to go up Table Mountain, but meets the Whale Cryer of Hermanus, and discovers that the monkeys in Cape Town have expensive tastes. Travelling through Ireland, he takes in the sights of Sligo, Kilkenny and Dublin, entertains audiences with his unique brand of stand-up, and learns to play the penny whistle – badly. And, in Singapore, he discovers the amazing secret behind the Japanese invasion of World War II, and realises that his hair is not suited to high humidity – unless he wants to end up looking like a member of the Jackson Five. Half hilarious stand-up routines, half cultural observations, these shows are both a tempting taster of the cities he visits and a perfect opportunity to spend some time in the wacky, whimsical, fantastically funny world of Ross Noble.