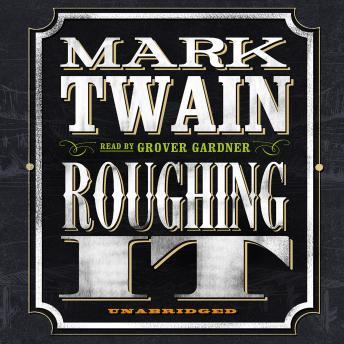 Download or Stream instantly more than 55,000 audiobooks.
Listen to "Roughing It" on your iOS and Android device.

In 1861, young Mark Twain found himself adrift as a tenderfoot in the Wild West. Roughing It is a hilarious record of his travels over a six-year period that comes to life with his inimitable mixture of reporting, social satire, and rollicking tall tales. Twain reflects on his scuffling years mining silver in Nevada, working at a Virginia City newspaper, being down-and-out in San Francisco, reporting for a newspaper from Hawaii, and more.
This humorous account is a patchwork of personal anecdotes and tall tales, many of them told in the “vigorous new vernacular” of the West.
Selling seventy-five thousand copies within a year of its publication in 1872, Roughing It was greeted as a work of “wild, preposterous invention and sublime exaggeration” whose satiric humor made “pretension and false dignity ridiculous.” Meticulously restored from a variety of original sources, this text adheres to the author’s wishes in thousands of details of wording, spelling, and punctuation.