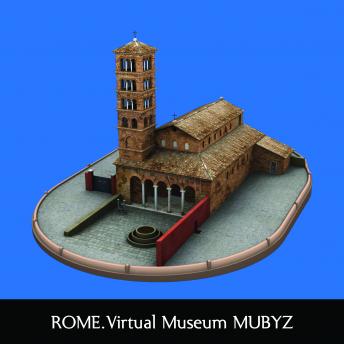 Download or Stream instantly more than 55,000 audiobooks.
Listen to "Saint John at the Latin Gate, Rome. Italy" on your iOS and Android device.

The audioguide tells the story, describes the architecture and reports interesting facts about the basilica.
Saint John the Evangelist preached in this place.
Tradition tells us that John, the apostle of Jesus, was placed in a cauldron of boiling oil, but came out miraculously uninjured and safe. The basilica was built on the remains of an ancient temple, dedicated to the cult of Diana, during the period of the pontificate of Gelasio I, roughly between 492 and 496.
Some masonry fragments found near the apse would seem to confirm the birth of the basilica in the fifth century. To confirm this theory there are some tiles of the old roof, bearing the mark of King Theodoric the Great (V-VI).
The real gem of this church are the medieval frescoes, discovered during the various restoration works, of the last century. The paintings are considered important because they represent the transition from Byzantine influence to that of Pietro Cavallini, one of the most notable exponents of the XIII century Roman school.
You can examine the 3D model of the church and observe its interior, through the MuByz App. The audioguide has been made by professionals in the field of history and art.