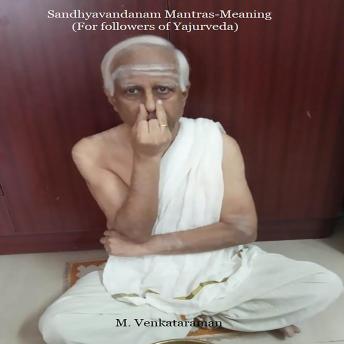 Download or Stream instantly more than 55,000 audiobooks.
Listen to "Sandhyavandanam Mantras-Meaning: For followers of Yajurveda" on your iOS and Android device.

Sandhya Vandanam is one of the efficient spiritual rituals of the Hindus. It helps in the realisation of the Divinity of the Self called as Atman in Hindu philosophy. It is an obligatory daily ritual called as Nithya Karma. It is an all-round complete ritual which incorporates the principles of the Supreme Divinity referred to as Brahman. Each part of the ritual gives an external expression for the development of an internal mental attitude and spiritual feeling. In this process, there is an effort to bring about self-purification and attunement to the Cosmic Reality.

The rituals are to be done thrice daily-early morning, at noon and at sunset. In the Hindu way of life, each person is primarily affiliated to a particular Vedic study, namely the Rig Veda, the Yajur Veda and the Sama Veda. Though the objectives are generally the same, there are variations in the mantras of these three vedas.

This book is an attempt to give the meanings of some of the important Mantras of the Yajur Veda sect basically followed in the southern part of India. Based on the different stages of the ritual, it has been divided into eighteen chapters for the purpose of easy grasp and understanding by those who are not well-versed in the knowledge of these mantras.

This is also published as an e-book as well as in printed form in Draft2Digital and Amazon KDP.