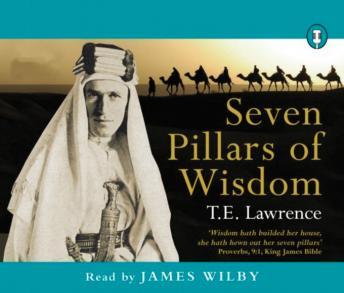 Download or Stream instantly more than 55,000 audiobooks.
Listen to "Seven Pillars of Wisdom" on your iOS and Android device.

Seven Pillars of Wisdom is Lawrence's account of the Arab revolt against the Turks and his own part in those events; transcribed from extensive notes which he kept at the time.


T.E. Lawrence (1888-1935) or 'Lawrence of Arabia' as he became widely known, was an almost mythical figure even during his own lifetime. Born in north Wales and educated in Oxford, he first moved to the Middle East in 1911 to work as an archaeologist. When WWI broke out, he started to work for British Intelligence, where he masterminded and co-ordinated military manoeuvres that determined the fate of the War in the Levantine Territories. This is Lawrence's own account of the Arab revolt against the Turks and his part in those events; transcribed from extensive notes which he kept at the time.