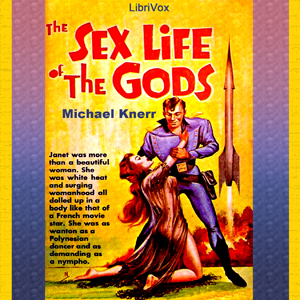 The Sex Life of the Gods

Download or Stream instantly more than 55,000 audiobooks.
Listen to "The Sex Life of the Gods" on your iOS and Android device.

Beth Danson was about twenty-five and, besides her deep auburn-brown hair and lovely face, she boasted an equally attractive body. He found himself captivated by the warm thrust of her breasts beneath the silk blouse. The clear milk of her flesh, at the “V” of her throat excited him in a strange way. When he thought of her as his wife, it was frightening. It was as though someone had tossed him a woman and expected him to just fall into the routine of marriage. It wouldn’t be hard to come to love this woman, but it would take awhile. Hell, he didn’t know her. She was a complete stranger who had suddenly told him they were married. There was nothing familiar about her; even the fingers that were softly working over his face were alien. (Summary by Blurb from the Front Flap!)