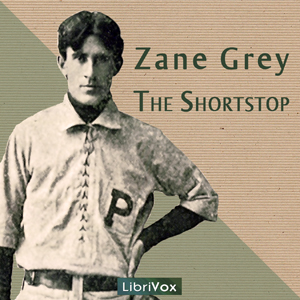 Download or Stream instantly more than 55,000 audiobooks.
Listen to "The Shortstop" on your iOS and Android device.

Zane Grey (Pearl Zane Gray) born in 1872 in Zanesville, Ohio was best known for his western stories, most notably Riders Of The Purple Sage which has been filmed four times, the last in 1996 starring Ed Harris and Amy Madigan. Among his other interests was baseball. He attended the University of Pennsylvania on a baseball scholarship where he earned a degree in dentistry. Grey later played minor league baseball with a team in Wheeling, West Virginia. According to the Internet Movie Data Base he is credited with 110 films made from his stories and books. Grey died from a heart attack in 1939 in Altadena, California.

In The Shortstop (1909) drawing on his baseball experience Grey follows the adventures of seventeen year-old Chase Alloway on his quest to make his fortune as a baseball player and lift his family out of poverty. Along the way young Chase encounters hardship and set-back. But with perseverance he discovers not only himself but friendship and love. (summary by Rowdy Delaney)