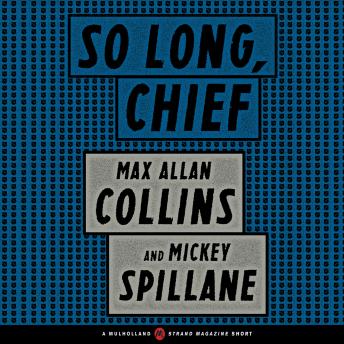 Download or Stream instantly more than 55,000 audiobooks.
Listen to "So Long, Chief" on your iOS and Android device.

From legendary noir novelist Mickey Spillane and Max Allan Collins, a short story in which world-famous private eye Mike Hammer repays a debt to a dying police chief, proving loyalty can be as deadly as deception.

A legendary and retired police chief lies in a New York hospital bed, visited by two strangers: the first is ex-cop-turned-PI Mike Hammer, whose life was saved more than once by the old man. To the detective, the chief gives a mysterious key. The second visitor murders the chief, mere days before he would have died from natural causes. Someone is trying to tie up loose ends, and Mike Hammer is the only one with the evidence and calculation to ferret him or her out.

'So Long, Chief' by Mickey Spillane and Max Allan Collins is one of 20 short stories within Mulholland Books's Strand Originals series, featuring thrilling stories by the biggest names in mystery from the Strand Magazine archives. View the full series list at mulhollandbooks.com and listen to them all!