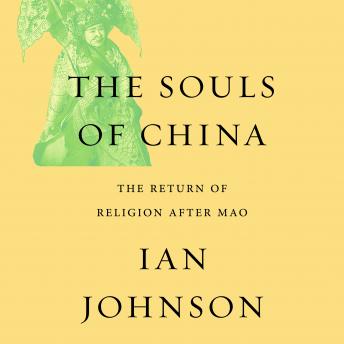 The Souls China: The Return of Religion After Mao

Download or Stream instantly more than 55,000 audiobooks.
Listen to "The Souls China: The Return of Religion After Mao" on your iOS and Android device.

From the Pulitzer Prize-winning journalist, a revelatory portrait of religion in China today-its history, the spiritual traditions of its Eastern and Western faiths, and the ways in which it is influencing China's future.

The Souls of China tells the story of one of the world's great spiritual revivals. Following a century of violent anti-religious campaigns, China is now filled with new temples, churches, and mosques-as well as cults, sects, and politicians trying to harness religion for their own ends. Driving this explosion of faith is uncertainty-over what it means to be Chinese and how to live an ethical life in a country that discarded traditional morality a century ago and is searching for new guideposts.

Ian Johnson first visited China in 1984; in the 1990s he helped run a charity to rebuild Daoist temples, and in 2001 he won a Pulitzer Prize for his coverage of the suppression of the Falun Gong spiritual movement. While researching this book, he lived for extended periods with underground church members, rural Daoists, and Buddhist pilgrims. Along the way, he learned esoteric meditation techniques, visited a nonagenarian Confucian sage, and befriended government propagandists as they fashioned a remarkable embrace of traditional values. He has distilled these experiences into a cycle of festivals, births, deaths, detentions, and struggle-a great awakening of faith that is shaping the soul of the world's newest superpower.