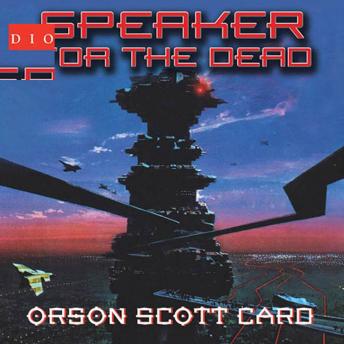 Speaker for the Dead

Download or Stream instantly more than 55,000 audiobooks.
Listen to "Speaker for the Dead" on your iOS and Android device.

The thrilling sequel to Ender's Game and winner of the Hugo and Nebula Awards—this full cast unabridged recording includes an original postscript written and recorded by author Orson Scott Card.

Three thousand years have passed since Ender Wiggin won humanity's war with the Buggers by totally destroying them. Ender remains young, traveling the stars at the speed of relativity, but a hundred years or more might pass on Earth while he experiences a month-long voyage. In three thousand years, Ender's books The Hive Queen and The Hegemon, written under a pseudonym, have become holy writ, while the name of Ender itself has become anathema: he is the Xenocide, the one who killed an entire race of thinking, feeling beings, killed the only other sapient race humankind had found in all the galaxy.

The only ones, that is, until the planet called Lusitania was discovered and colonized. The discovery was seen as a gift to humanity, a chance to redeem the destruction of the Buggers. This time, the Starways Congress vowed, there would be no tragic misunderstanding leading to war. But once again men die, killed by the aliens in a rite no one understands. Ender, now known only as the Speaker for the Dead, comes to Lusitania to speak for those who have died and discovers that in order to tell the truth about them, he must unravel the secrets of Lusitania.