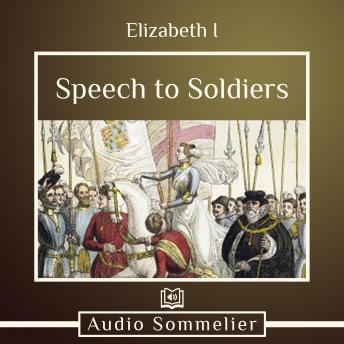 Download or Stream instantly more than 55,000 audiobooks.
Listen to "Speech to Soldiers" on your iOS and Android device.

Queen Elizabeth delivered this speech to the soldiers at Tilbury as they prepared to face the Spanish Armada. Leaving her body guard behind, she walked among the men in a symbolic act of solidarity. She told them, “I know I have the body of a weak, feeble woman; but I have the heart and stomach of a king, and of a king of England too.” By telling them she would fight alongside them if necessary, Queen Elizabeth further established herself as both a fellow citizen and a benevolent ruler.