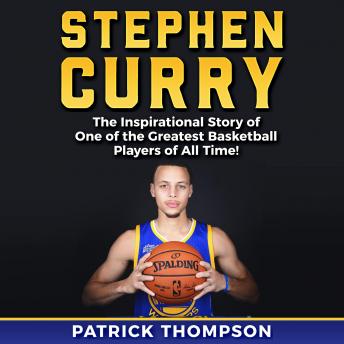 Download or Stream instantly more than 55,000 audiobooks.
Listen to "Stephen Curry" on your iOS and Android device.

They called him: 'the greatest all-around shooter'.

Do you want to learn more about the life of Stephen Curry while being inspired?

One of today’s most sought-after NBA superstars was once a young boy who was perceived as weak. Despite this negative impression, he has managed to rise from his simple life in North Carolina into becoming one of the sharpest shooters in the history of the NBA. Stephen Curry’s journey to become one of the NBA’s legends has been tough and rocky. He might be the son of an NBA veteran, yet his journey towards his dreams was not smooth. He also had his fair share of rejections and doubts - both from his own self and others. However, years of diligent practice helped him perfect his dazzling and surprising moves on the court. It allowed him to step up and lead his team, the Golden State Warriors, to numerous wins. This audiobook will allow you to take a peek into Stephen Curry’s personal life. Get to know the superstar better. Beyond the basketball accolades, the baby-faced assassin is a loving husband and father. He also has his own stories of fear, trials, and touching moments.

With this book you'll learn:

Scroll to the top of the page and buy this audiobook today and be inspired now!