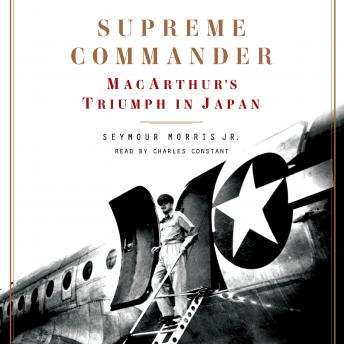 Download or Stream instantly more than 55,000 audiobooks.
Listen to "Supreme Commander: MacArthur's Triumph in Japan" on your iOS and Android device.

He is the most decorated general in American history—and the only five five-star general to receive the Medal of Honor. Yet Douglas MacArthur's greatest victory was not in war but in peace.

As the uniquely titled Supreme Commander for the Allied Powers, he was charged with transforming a defeated, militarist empire into a beacon of peace and democracy—“the greatest gamble ever attempted,” he called it. A career military man, MacArthur had no experience in politics, diplomacy, or economics. A vain, reclusive, and self-centered man, his many enemies in Washington thought he was a flaming peacock, and few, including President Harry Truman's closest advisors, gave him a chance of succeeding. Yet MacArthur did so brilliantly, defying timetables and expectations.

Supreme Commander tells for the first time, the story of how MacArthur's leadership achieved a nation-building success that had never been attempted before—and never replicated since. Seymour Morris Jr. reveals this flawed man at his best who treated a defeated enemy with respect; who made informed and thoughtful decisions yet could be brash and stubborn when necessary, and who lead the Occupation with intelligence, class, and compassion.

Morris analyzes MacArthur's key tactical choices, explaining how each contributed to his accomplishment, and paints a detailed picture of a true patriot—a man of conviction who proved to be an outstanding and effective leader in the most extraordinary circumstances.