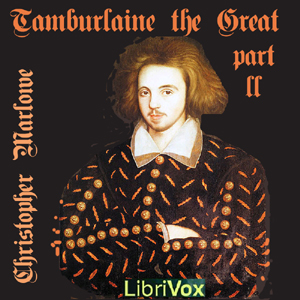 Download or Stream instantly more than 55,000 audiobooks.
Listen to "Tamburlaine the Great, Part 2" on your iOS and Android device.

Tamburlaine the Great is the name of a play in two parts by Christopher Marlowe. It is loosely based on the life of the Central Asian emperor, Timur 'the lame'. Written in 1587 or 1588, the play is a milestone in Elizabethan public drama; it marks a turning away from the clumsy language and loose plotting of the earlier Tudor dramatists, and a new interest in fresh and vivid language, memorable action, and intellectual complexity. Along with Thomas Kyd's The Spanish Tragedy, it may be considered the first popular success of London's public stage.

In Part 2, Tamburlaine grooms his sons to be conquerors in his wake as he continues to conquer his neighbouring kingdoms. One of his sons, Calyphas, preferring to stay by his mother's side and not risk death, incurs Tamburlaine's wrath. Seeing this son as a coward, Tamburlaine kills him in anger after a battle in which he refuses to fight. During this time, Bajazeth's son, Callapine, plans to avenge his father's death. Finally, while attacking an Islamic nation, he scornfully burns a copy of the Qur'an and claims to be greater than God. Suddenly, Tamburlaine is struck ill and dies, giving his power to his remaining sons, but still aspiring to greatness as he departs life. (Summary by Wikipedia)