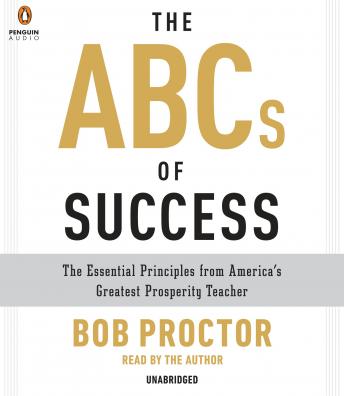 The ABCs of Success: The Essential Principles from America's Greatest Prosperity Teacher

Download or Stream instantly more than 55,000 audiobooks.
Listen to "The ABCs of Success: The Essential Principles from America's Greatest Prosperity Teacher" on your iOS and Android device.

An accessible guide to the principles of success by one of the most respected and sought-after motivational speakers of our time. In the tradition of Og Mandino and Zig Ziglar, this inspirational guide uses a wide variety of subjects, from “Achievement” to “Worry,” to bring clarity, information, and motivation to readers.

For millions of readers, Bob Proctor’s name is synonymous with success. A former protégé of personal development pioneer Earl Nightingale, Proctor first built a wildly successful business career, and then an internationally successful speaking career, elaborating on the principles of Napoleon Hill’s Think and Grow Rich and other classic success and prosperity texts. Proctor’s position in the business motivation community equals that of Stephen Covey or Og Mandino. But as is not the case with those masters, his books have never been available to the general public—until now!

In The ABCs of Success—the first trade book ever published by this master of motivation and prosperity—Proctor goes beyond the simple laws of success and attraction, weighing in on sixty-seven different topics essential to all those who wish to make their dreams a reality, including persistence, winning, effectiveness, and vision. Organized in A-to-Z fashion and composed of brief essays that can be read over and over, The ABCs of Success is an essential resource for anyone who wants the combined wisdom of a century of success thinking in a single, accessible volume.