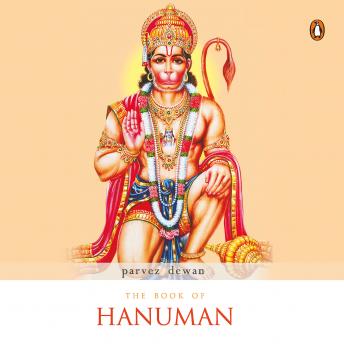 The Book Of Hanuman

Download or Stream instantly more than 55,000 audiobooks.
Listen to "The Book Of Hanuman" on your iOS and Android device.

Hanuman is an outstanding scholar, a fearless warrior, and the ideal lieutenant: intelligent, totally committed to his master, selfless and humble. Born into the Vanar tribe, a clan of the upa-devatas (demi-deities), he represents the four best-known divine attributes akhand brahmacharya (lifelong celibacy), immense physical prowess, a command of the scriptures, and unquestioning dasya bhakti (worship by serving the Lord). While Hanuman is a positive force in the life of Ram, stepping in when his fortunes are at their lowest, Ram, with his enormous powers, helps his loyal follower realize his true potential. Ram thus becomes the goal, and Hanuman, the path to attaining the goal. The Book of Hanuman recounts the story of Hanuman as the greatest devotee the most obedient servant of Ram. The book is divided into two sections. The first section traces the story of Hanuman from his meeting with Ram at Lake Pampa till the time when Ram returns to his divine form, and the second details the attributes of Hanuman, his varied representations in Hindu iconography, and rituals and prayers associated with his worship. Drawing upon stories from Valmiki’s Ramayana, Parvez Dewan weaves an engrossing narrative that captures the significance of Hanuman, perhaps the most accessible deity in the Hindu pantheon.