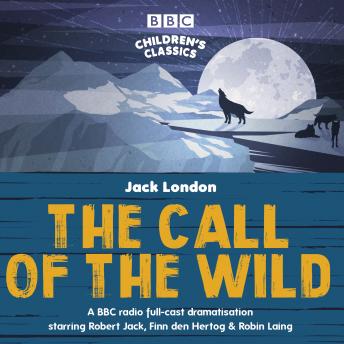 The Call of the Wild: A BBC Radio full-cast dramatisation

Download or Stream instantly more than 55,000 audiobooks.
Listen to "The Call of the Wild: A BBC Radio full-cast dramatisation" on your iOS and Android device.

A BBC radio full-cast dramatisation of this much-loved classic adventure about a dog named Buck.

In Yukon, Canada during the 1890s Klondike Gold Rush, strong sled dogs were in high demand. Buck is stolen from his comfortable home in California and sold into service as a sled dog in Alaska. He becomes progressively feral in the harsh environment, where he is forced to fight to survive and dominate other dogs.

Sold to a group of inexperienced gold hunters, he is eventually saved by John Thornton, with whom he forms a deep bond.

Exciting and action-packed, The Call of the Wild explores the timeless relationship between man and dog, and the draw of primitive instincts that pull Buck away from humanity towards the wilderness.