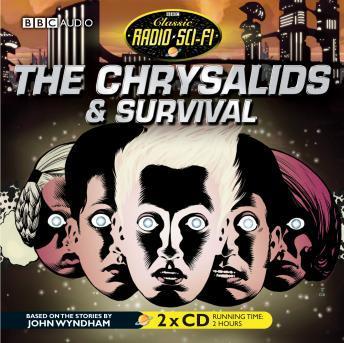 Download or Stream instantly more than 55,000 audiobooks.
Listen to "The Chrysalids & Survival" on your iOS and Android device.

Two classic tales from acclaimed British science fiction writer John Wyndham. In The Chrysalids, ten-year-old David is a happy, ordinary boy, untroubled except for occasional strange dreams about a mysterious city – until he befriends Sophie, who is unlike anybody he has met before: she has six toes. But, in the ultra-religious village of Waknut, all abnormality is abhorred as an offence against God, and he must keep her secret to himself. When he learns that he, too, is ‘deviant’, he realises that differences can be very dangerous indeed... Survival, set in the future, concerns the first auto-piloted space flight. When the ship meets with an accident, one of the passengers is killed and the others are cast adrift into space. They have enough supplies to last for three months – but the only woman on board, Alice Morgan, is pregnant, and needs extra rations. Then, food starts to go missing from the larder. What lengths will the passengers go to in order to survive? Stephen Garlick, Susan Sheridan, John Moffatt and Nicholas Courtney star in these two disturbing stories about the darker side of human nature. This CD release also includes a detailed sleeve note recounting the making of the radio adaptations, written by Andrew Pixley.