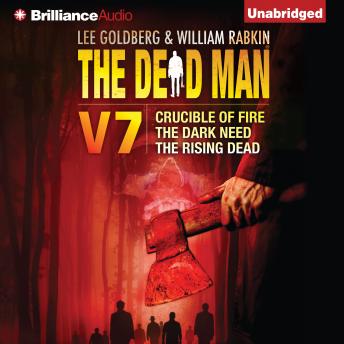 Download or Stream instantly more than 55,000 audiobooks.
Listen to "The Dead Man Vol 7" on your iOS and Android device.

PITTING HIM IN A FIGHT TO SAVE US ALL, AND HIS OWN SOUL, FROM THE CLUTCHES OF PURE EVIL IN THESE THREE EXHILARATING TALES OF DARK HUMOR, NON-STOP ACTION, AND PURE HORROR IN THE DEAD MAN SERIES. Matt Cahill is part of a team of smokejumpers who are dropped into the heart of a raging firestorm, a CRUCIBLE OF FIRE that is fueled by a flamethrower-wielding madman who has fallen prey to Mr. Dark’s evil touch. Matt is in dogged pursuit across the icy Cascade Mountains of a shape-shifting killer possessed by THE DARK NEED for blood and the souls of his victims …but can he catch the monster without falling prey himself? In the blasted hell of the Arizona desert, Matt meets a mysterious stranger who may know how he became one of THE RISING DEAD…and the secret to defeating Mr. Dark. “BUCKLE UP …THIS IS BIG TICKET HORROR!” New York Times bestselling author Jonathan Maberry