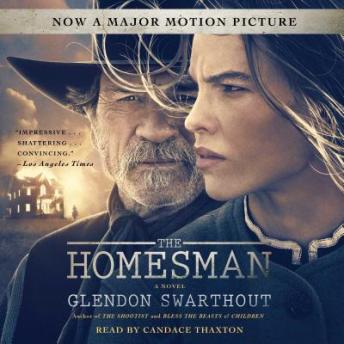 The Homesman: A Novel

Download or Stream instantly more than 55,000 audiobooks.
Listen to "The Homesman: A Novel" on your iOS and Android device.

Now a major film directed by and starring Tommy Lee Jones and co-starring Meryl Streep, Hilary Swank, and John Lithgow, this classic Western novel captures the devastating realities of early frontier life through the eyes of one extraordinary woman.

Now a major motion picture directed by Tommy Lee Jones, The Homesman is a devastating story of early pioneers in 1850s American West. It celebrates the ones we hear nothing of: the brave women whose hearts and minds were broken by a life of bitter hardship. A “homesman” must be found to escort a handful of them back East to a sanitarium. When none of the county’s men steps up, the job falls to Mary Bee Cuddy—ex-teacher, spinster, indomitable and resourceful. Brave as she is, Mary Bee knows she cannot succeed alone. The only companion she can find is the low-life claim jumper George Briggs. Thus begins a trek east, against the tide of colonization, against hardship, Indian attacks, ice storms, and loneliness—a timeless classic told in a series of tough, fast-paced adventures.

In an unprecedented sweep, Glendon Swarthout’s novel won both the Western Writers of America’s Spur Award and the Western Heritage Wrangler Award. A new afterword by the author’s son Miles Swarthout tells of his parents Glendon and Kathryn’s discovery of and research into the lives of the oft-forgotten frontier women who make The Homesman as moving and believable as it is unforgettable.