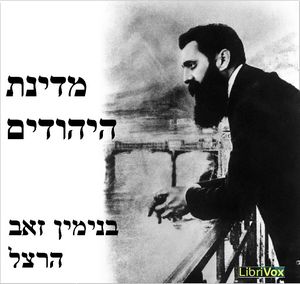 Download or Stream instantly more than 55,000 audiobooks.
Listen to "The Jewish State" on your iOS and Android device.

Der Judenstaat (German, The Jewish State) is a book written by Theodor Herzl and published in 1896 in Leipzig and Vienna by M. Breitenstein's Verlags-Buchhandlung. It was originally called "Address to the Rothschilds" referring to the Rothschild family banking dynasty which was very influential in the realization of a Zionist state in Palestine. It is considered to be one of the most important texts of early Zionism. As expressed in this book, Herzl envisioned the founding of a future independent Jewish state during the twentieth century. He argued that the best way of avoiding anti-Semitism in Europe was to create this independent Jewish state. Herzl, who had lived as a secular, largely assimilated Jew, was fluent in neither Hebrew nor Yiddish. His lack of contact with Jewish culture and intellectual currents, and his limited contact with Jews less assimilated than he prior to hitting upon the idea of a Jewish return to Zion, led him to imagine that popular Jewish support for a Jewish State elsewhere than in Israel was conceivable. In Der Judenstaat, Herzl noted the possibility of a Jewish state in Argentina. (Summary by Wikipedia)
Translated into Hebrew by Michal Berkovitch.