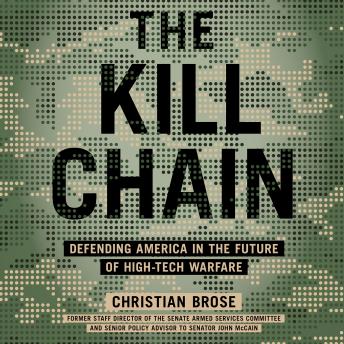 The Kill Chain: Defending America in the Future of High-Tech Warfare

Download or Stream instantly more than 55,000 audiobooks.
Listen to "The Kill Chain: Defending America in the Future of High-Tech Warfare" on your iOS and Android device.

From a former senior advisor to Senator John McCain comes an urgent wake-up call about how new technologies are threatening America's military might.

For generations of Americans, our country has been the world's dominant military power. How the US military fights, and the systems and weapons that it fights with, have been uncontested. That old reality, however, is rapidly deteriorating. America's traditional sources of power are eroding amid the emergence of new technologies and the growing military threat posed by rivals such as China. America is at grave risk of losing a future war.

As Christian Brose reveals in this urgent wake-up call, the future will be defined by artificial intelligence, autonomous systems, and other emerging technologies that are revolutionizing global industries and are now poised to overturn the model of American defense. This fascinating, if disturbing, book confronts the existential risks on the horizon, charting a way for America's military to adapt and succeed with new thinking as well as new technology. America must build a battle network of systems that enables people to rapidly understand threats, make decisions, and take military actions, the process known as "the kill chain." Examining threats from China, Russia, and elsewhere, The Kill Chain offers hope and, ultimately, insights on how America can apply advanced technologies to prevent war, deter aggression, and maintain peace