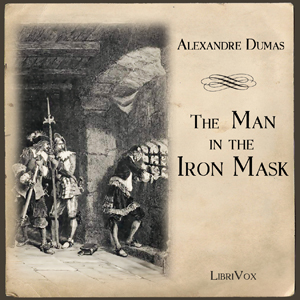 The Man in the Iron Mask

Download or Stream instantly more than 55,000 audiobooks.
Listen to "The Man in the Iron Mask" on your iOS and Android device.

In this, the last of the Three Musketeers novels, Dumas builds on the true story of a mysterious prisoner held incognito in the French penal system, forced to wear a mask when seen by any but his jailer or his valet. If you have skipped the novels between The Three Musketeers and this, a few notes will bring you into the story:

On one side - Aramis, now a bishop and secretly the Captain-General of the Jesuit Order, who believes he has found a path to a higher honor - the papacy. Monsieur Fouquet, the vastly rich minister of finance, Aramis' ally. Philippe, the identical twin of King Louis XIV, who grew up in ignorance of his pedigree, and whose surrogate parents were murdered on the king's order and himself sent into the notorious Paris prison, the Bastille, there held in solitary confinement.

On the other side - King Louis XIV, selected as the twin who would be king by his mother, and who intends that his brother will never challenge him. Monsieur Colbert, first minister, who is jealous of Fouquet and plots his downfall.

Unaligned and in danger of collateral damage - d'Artagnan, now captain of the King's Musketeers and so the king's chief defender, who suspects plots running beneath the surface and who is trying to unearth them. Athos, now the Comte (Count) de la Fer and one of the most respected noblemen of France. Raoul, Athos' son and vicomte (viscount), desperately in love with Mademoiselle de la Valliere, who the king has taken as his mistress. Porthos, grown extremely stout and happy as the Baron du Vallon.

Aramis discovers the hidden Philippe and hatches a plot to substitute him for the sitting king, putting Louis in Philippe's cell in the Bastille. This even succeeds... for a short while. But Aramis has not reckoned with a man whose loyalty to the throne exceeds his own welfare and who disastrously reverses the plot. Now it is time for the plotters to scurry to cover, there to figure some way to recover their lost ambitions. (Summary written by Mark Smith.)