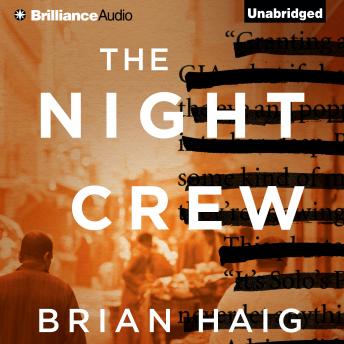 Download or Stream instantly more than 55,000 audiobooks.
Listen to "The Night Crew" on your iOS and Android device.

Lieutenant Colonel Sean Drummond, a cocky US Army lawyer who’s not afraid to be blunt, finds himself up to his neck in a case he didn’t ask to take. Five US soldiers, tasked with guarding Iraqi prisoners, stand accused of committing depraved atrocities against their charges. Drummond is assigned to defend one of them: a hardscrabble young woman who is either incredibly naive or deceptively evil… and whose incriminating photos made the case an international scandal. Drummond and his cocounsel, the fiercely antiwar Katherine Carlson, have a complicated and combative history, but they can’t afford to get distracted now. They must determine what drove five young patriots to fall so far to the dark side of human nature. As Drummond uncovers evidence that his client has been used as a pawn in a secret strategy involving torture, he realizes that he’s caught up in a conspiracy that reaches the highest levels of government. Breaking down the US military’s formidable stonewalling could destabilize the government and put his life at risk—but Drummond’s not the type to back away from a good fight