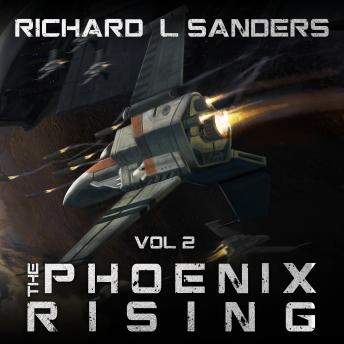 Download or Stream instantly more than 55,000 audiobooks.
Listen to "The Phoenix Rising" on your iOS and Android device.

As the most serious threat ever facing the galaxy now looms over them—weapons able to destroy stars—Calvin and his enterprising crew continue their mission to expose and eliminate the dark conspiracy that has taken root inside the Empire. Now a fugitive on the run, Calvin has no choice but to work alongside Raidan’s mysterious Organization. And accept help from the unlikeliest band of fair-weather friends, including a mysterious squad of Polarian soldiers, an ex-intelligence-operative from the Rotham Republic, and the ever elusive Tristan—whose truest motives are a closely guarded secret. To make matters worse, Calvin is hunted mercilessly across the stars by Intel Wing’s top operative, Lafayette Nimoux, who is aided by a double-agent on Calvin’s own ship. Meanwhile the sands of fortune are shifting within the Empire, upsetting the delicate political climate. Warships and civilian transports are vanishing without a trace and murders in the dark are going unnoticed. All eyes are fixed on Renora—a human colony that has been savagely attacked and thrown into civil war. The prime suspect behind the attack is none other than Princess Kalila Akira. All the dark signs are pointing to what could be the death of the Empire, and the end of human dominance in the galaxy.'