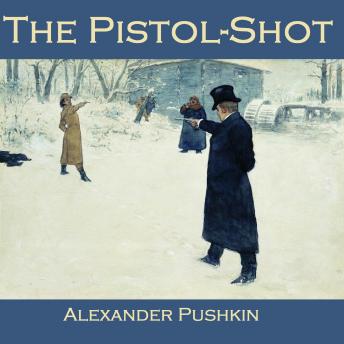 Download or Stream instantly more than 55,000 audiobooks.
Listen to "The Pistol-Shot" on your iOS and Android device.

Alexander Sergeyevich Pushkin (1799 – 1837) was a Russian author of the Romantic era who is considered by many to be the greatest Russian poet and the founder of modern Russian literature.

He was notoriously sensitive about his own personal honour and is believed to have fought as many as twenty-nine duels... the last of which proved fatal for him. A duel is the crux of his masterful short story The Pistol-Shot - but it is a duel with a difference. It starts out normally enough... an insult, a challenge, a meeting with pistols at dawn. But when the first shot misses, the insolent nonchalence of the first shooter (who goes on eating cherries while is adversary takes aim) prompts the other dueller to delay taking his shot until such a time as shall suit him. He is determined to pick a moment when death will be most unwelcome and inconvenient for his adversary. One day a letter arrives for him... and he knows that the moment has come.