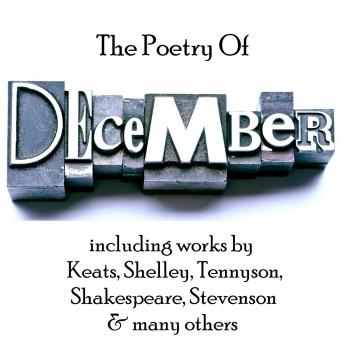 The Poetry of December

Download or Stream instantly more than 55,000 audiobooks.
Listen to "The Poetry of December" on your iOS and Android device.

December - The 12th month and closing month in the Gregorian calendar. Winter is upon the land and the poets including such as Keats, Shelley, Tennyson, Shakespeare and Stevenson reflect their views and thoughts

Among our readers are Richard Mitchley and Ghizela Rowe. The tracks are; December - An Introduction; Ode Written On The First Of December By Robert Southey; A Calendar Of Sonnets - December By Helen Hunt Jackson; A December Day By Robert Fuller Murray; A Wife In London (December 1899) By Thomas Hardy; Come Come Thou Bleak December Wind (Fragment 3) By Samuel Taylor Coleridge; Snow-Bound (The Sun That Brief December Day) By John Greenleaf Whittier; How Like A Winter Hath my Absence Been - Sonnet 97 By William Shakespeare; December By John Payne; Lines Written Among The Euganean Hills By Percy Bysshe Shelley; Sicily December 1908 By Henry Van Dyke; December By John Bannister Tabb; December Sales Drive By Daniel Sheehan; The Idlers Calendar. Twelve Sonnets For The Year - December By Wilfred Scawen Blunt; The December Rose By Edith Nesbit; On The Death Of Major Whitefoord, December 15th 1825 By Eliza Acton; December Matins By Alfred Austin; To A Lady Who Presented to The Author A Lock Of Hair Braided With His Own And Appointed A Night In December To Meet Him In The Garden By Lord Byron; Winter Stores By Charlotte Bronte; In Drear Nighted December By John Keats; The Foolish Fir Tree By Henry Van Dyke; The Death Of The Old Year By Alfred Lord Tennyson; Christmas At Sea By Robert Louis Stevenson; December 23rd 1879 By George MacDonald; Old Christmastide (An Extract) By Sir Walter Scott; Christmas Bells By Henry Wadsworth Longfellow; Ceremonies For Christmas By Robert Herrick; December 27th 1879 By George MacDonald; At The Entering Of The New Year By Thomas Hardy; Ring Out Wild Bells By Alfred Lord Tennyson.