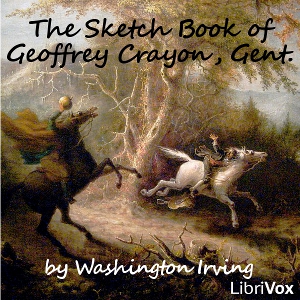 Download or Stream instantly more than 55,000 audiobooks.
Listen to "The Sketch Book of Geoffrey Crayon, Gent." on your iOS and Android device.

Apart from "Rip Van Winkle" and "The Legend of Sleepy Hollow" - the pieces which made both Irving and The Sketch Book famous - other tales include "Roscoe", "The Broken Heart", "The Art of Book-making", "A Royal Poet", "The Spectre Bridegroom", "Westminster Abbey", "Little Britain", and "John Bull". His stories were highly influenced by German folktales, with "The Legend of Sleepy Hollow" being inspired by a folktale recorded by Karl Musäus. Stories range from the maudlin (such as "The Wife" and "The Widow and Her Son") to the picaresque ("Little Britain") and the comical ("The Mutability of Literature"), but the common thread running through The Sketch Book — and a key part of its attraction to readers — is the personality of Irving's pseudonymous narrator, Geoffrey Crayon. Erudite, charming, and never one to make himself more interesting than his tales, Crayon holds The Sketch Book together through the sheer power of his personality - and Irving would, for the rest of his life, seamlessly enmesh Crayon's persona with his own public reputation. (Introduction by Wikipedia)