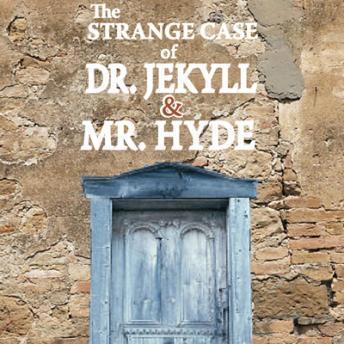 The Strange Case of Dr. Jekyll and Mr. Hyde

Download or Stream instantly more than 55,000 audiobooks.
Listen to "The Strange Case of Dr. Jekyll and Mr. Hyde" on your iOS and Android device.

Robert Louis Stevenson's brilliant story is a chilling mystery exploring the complexity of human nature, the combination of good and evil in everyone.

Dr. Henry Jekyll is good man, a hardworking scientist who is causing his friends great worry about his relationship with Edward Hyde, a violent, disagreeable man, who is in constant trouble. An innocent man is murdered, and Mr. Hyde is the only suspect.

How is Mr.Jekyll intimately involved in this death? How this mystery unravels has held fans spellbound for more than 150 years.

AUTHOR
Robert Louis Stevenson (1850-1894) was a Scottish author and poet. The son and grandson of lighthouse designers, Stevenson spent a great deal of time with his father, listening to the tall tales of sailors, planting the seeds that became ""Treasure Island"" and ""Kidnapped"". In chronic poor health, Stevenson became a voracious reader as a child, and a beloved nanny encouraged him to write. Although supportive of his desire to become a writer, his parents insisted on a backup plan, which was a law degree.

The law degree was unnecessary, Stevenson's wanderlust provided opportunities for travel writing and in pursuit of healthier climates, Stevenson traveled the world. Extremely popular during his lifetime, Stevenson finally found a pleasing climate in Samoa and lived happily ever after with his beloved wife.

The classic Robert Louis Stevenson story tells about a doctor who, through frightening experiments, goes mad. It opens with friends talking about events seen recently in the area. The two men realize after a time that the horror that plagues the area is connected somehow to another school friend who has been somewhat aloof from his former classmates.

Clearly, the standards of English society are displayed by Dr. Jekyll's comrades. Their efforts to understand the relationship between Dr. Jekyll and Mr. Hyde bring them to the point of doom. There is something wrong with Mr. Hyde. They just know it. Why do they despise Mr. Hyde so? Who is this Mr. Hyde who appears suddenly out of nowhere? Why is Mr. Hyde the sole heir to Dr. Jekyll's estate? Will Hyde be the end of Dr. Jekyll?

This intriguing tale may lead readers to question the limits of science and personal experimentation with potions and the unknown.

Books on CD are a great way to expose kids to classic stories. They may listen to the stories while on a long car trip. They may listen to the stories while drawing or some other activity. Unabridged audiobooks like this one can also help students who are working to improve their reading level or reading comprehension; by listen to another reader and following along in the book, the student has the opportunity to learn and understanding of the story better.

The Strange Case of Dr. Jekyll and Mr. Hyde is one of my personal favorite scary stories. This story has been made into some very fine movies through the years and although I enjoy the movies, there is nothing like vivid imagination creating the heinous Mr. Hyde to scare and perplex a teen mind.
Reviewed By: Kate O'Mara - EHO Eclectic Homeschool Online
"