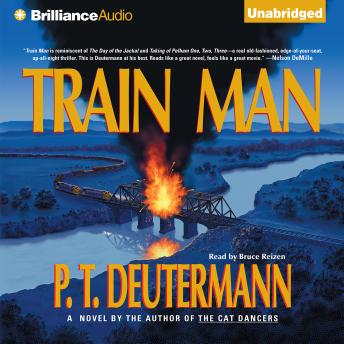 Download or Stream instantly more than 55,000 audiobooks.
Listen to "Train Man" on your iOS and Android device.

Only six major rail bridges cross the Mississippi River and connect one half of our country to the other. When one of them collapses as a freight train is crossing, the FBI sends agents Hush Hanson and Carolyn Lang to investigate. Hush and Carolyn suspect a bomb, but there are no clues to suggest who planted it. Meanwhile, at an Alabama army depot, a military train carrying a deadly cargo begins its journey west. This train must cross the Mississippi before its cargo becomes unstable - and then another bridge goes down. As more bridges go down and the plight of the doomsday train intensifies, it becomes ever more obvious that Hanson is being set up to take a fall as part of some bureaucratic political intrigue within the FBI. "Intelligent, expertly detailed, and highly suspenseful, Train Man is a speeding entertainment locomotive." -- Publishers Weekly (starred review)