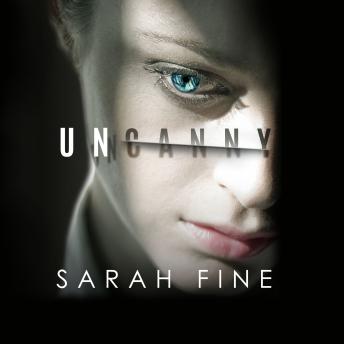 Download or Stream instantly more than 55,000 audiobooks.
Listen to "Uncanny" on your iOS and Android device.

“A dark and twisty psychological thriller that straddles the question of what it means to be human.” —Kirkus Reviews

Two sisters. One death. No memories.

Cora should remember every detail about the night her stepsister, Hannah, fell down a flight of stairs to her death, especially since her Cerepin—a sophisticated brain-computer interface—may have recorded each horrifying moment. But when she awakens after that night, her memories gone, Cora is left with only questions—and dread of what the answers might mean.

When a downward spiral of self-destruction forces Cora to work with an AI counselor, she finds an unexpected ally, even as others around her grow increasingly convinced that Hannah’s death was no accident. As Cora’s dark past swirls chaotically with the versions of Hannah’s life and death that her family and friends want to believe, Cora discovers the disturbing depths of what some people may do—including herself.

With her very sanity in question, Cora is forced to face her greatest fear. She will live or die by what she discovers.