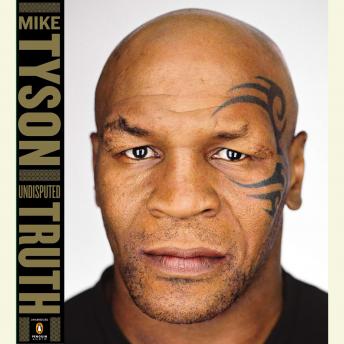 Download or Stream instantly more than 55,000 audiobooks.
Listen to "Undisputed Truth" on your iOS and Android device.

A bare-knuckled, tell-all memoir from Mike Tyson, the onetime heavyweight champion of the world—and a legend both in and out of the ring.

Philosopher, Broadway headliner, fighter, felon—Mike Tyson has defied stereotypes, expectations, and a lot of conventional wisdom during his three decades in the public eye. Bullied as a boy in the toughest, poorest neighborhood in Brooklyn, Tyson grew up to become one of the most thrilling and ferocious boxers of all time—and the youngest heavyweight champion ever. But his brilliance in the ring was often compromised by reckless behavior. Years of hard partying, violent fights, and criminal proceedings took their toll: by 2003, Tyson had hit rock bottom, a convicted felon, completely broke, the punch line to a thousand bad late-night jokes. Yet he fought his way back; the man who once admitted being addicted “to everything” regained his success, his dignity, and the love of his family. With a triumphant one-man stage show, his unforgettable performances in the Hangover films, and his newfound happiness and stability as a father and husband, Tyson’s story is an inspiring American original.
Brutally honest, raw, and often hilarious, Tyson chronicles his tumultuous highs and lows in the same sincere, straightforward manner we have come to expect from this legendary athlete. A singular journey from Brooklyn’s ghettos to worldwide fame to notoriety, and, finally, to a tranquil wisdom, Undisputed Truth is not only a great sports memoir but an autobiography for the ages.