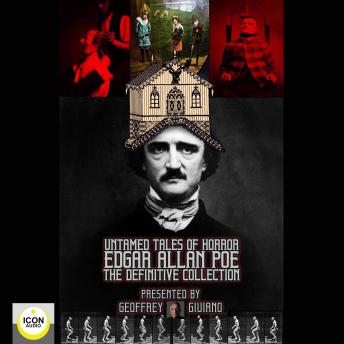 Download or Stream instantly more than 55,000 audiobooks.
Listen to "Untamed Tales of Horror; Edgar Allen Poe; The Definitive Collection" on your iOS and Android device.

Edgar Allan Poe was one of the most important and influential American writers of the 19th century. He was the first author to try to make a professional living as a writer. Much of Poe's work was inspired by the events that happened around him. His poetry alone would ensure his spot in the literary canon. Poe's notable verses range from the early masterpiece “To Helen” to the dark, mysterious “Ulalume.” From “The Raven,” which made him world-famous upon its publication in 1845, to “Annabel Lee,” the posthumously published eulogy for a maiden “in a kingdom by the sea.”
Most famously, Poe completely transformed the genre of the horror story with his masterful tales of psychological depth and insight not envisioned in the genre before his time and scarcely seen in it since. Stories like “The Tell-Tale Heart,” “The Cask of Amontillado,” “The Pit and the Pendulum,” “The Masque of the Red Death,” and “The Fall of the House of Usher” reveal Poe’s talent at its height. He was an early pioneer in the genre of science fiction. Poe was fascinated by the science of his time, and he often wrote stories about new inventions.
Poe too is credited with inventing the modern detective story with “The Murders in the Rue Morgue.” His concept of deductive reasoning, which he called 'ratiocination' inspired countless authors, most famous among them Sir Arthur Conan Doyle, creator of Sherlock Holmes.
Mixed and assembled by Macc Kay in Bangkok
Production executive Avalon Giuliano in London
ICON Intern Eden Giuliano in Delhi
Music By AudioNautix With Their Kind Permission
©2020 Icon Audio Arts (P) 2020 Icon Audio Arts LLC