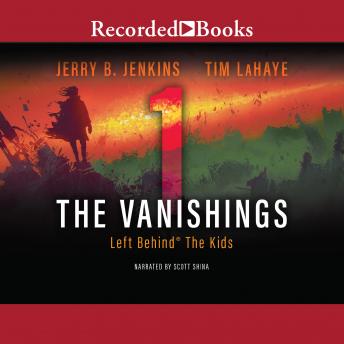 Download or Stream instantly more than 55,000 audiobooks.
Listen to "The Vanishings" on your iOS and Android device.

The evening begins like many others. Lionel falls asleep while listening to his uncle tell stories. Ryan stays up reading and listening to music. Vicki goes out smoking pot with her friends. And Judd, tired of being told what to do, takes his father's credit card and heads to the airport in search of freedom. But in one shocking moment, everything changes. All over the world, millions of people suddenly vanish. Driverless cars crash on the highways, and planes fall through the sky without pilots. Each of the four kids soon discovers friends and family members missing. Will they be able to learn the truth behind the disappearances?Authors Jerry B. Jenkins and Tim LaHaye base this thriller on Left Behind, their riveting book that has topped best-seller lists across the country and captured the attention of Hollywood producers. Narrator Scott Shina vividly portrays the 'end times' through the eyes of the four young friends.