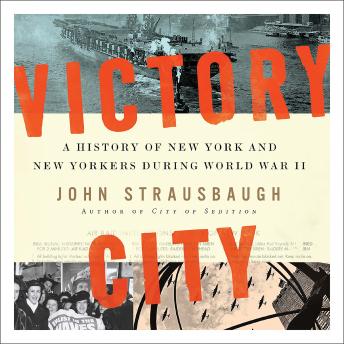 Download or Stream instantly more than 55,000 audiobooks.
Listen to "Victory City: A History of New York and New Yorkers during World War II" on your iOS and Android device.

From John Strausbaugh, author of City of Sedition and The Village, comes the definitive history of Gotham during the World War II era.

New York City during World War II wasn't just a place of servicemen, politicians, heroes, G.I. Joes and Rosie the Riveters, but also of quislings and saboteurs; of Nazi, Fascist, and Communist sympathizers; of war protesters and conscientious objectors; of gangsters and hookers and profiteers; of latchkey kids and bobby-soxers, poets and painters, atomic scientists and atomic spies.

While the war launched and leveled nations, spurred economic growth, and saw the rise and fall of global Fascism, New York City would eventually emerge as the new capital of the world. From the Gilded Age to VJ-Day, an array of fascinating New Yorkers rose to fame, from Mayor Fiorello La Guardia to Franklin and Eleanor Roosevelt, Langston Hughes to Joe Louis, to Robert Moses and Joe DiMaggio.

In Victory City, John Strausbaugh returns to tell the story of New York City's war years with the same richness, depth, and nuance he brought to his previous books, City of Sedition and The Village, providing readers with a groundbreaking new look into the greatest city on earth during the most transformative -- and costliest -- war in human history.