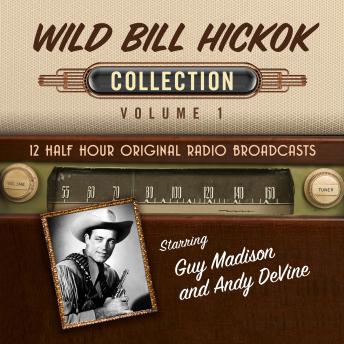 Download or Stream instantly more than 55,000 audiobooks.
Listen to "Wild Bill Hickok, Collection 1" on your iOS and Android device.

James Butler Hickok, better known as “Wild Bill” Hickok was a folk hero of the American Old West known for being a lawman, gunfighter, gambler, and showman. He earned a great deal of notoriety in life and in death. His life has been depicted numerous times in literature, radio, television and film. His death is also quite notable – he was shot and killed while playing five-card stud. He was holding two pairs, black aces, and black eights, which has become known as “Dead Man’s Hand.” In 1951, Kellogg’s cereals brought Wild Bill Hickok to radio and television starring Guy Madison as U.S. Marshal Wild Bill Hickok and Andy Devine as his gravel-voiced comedy sidekick Jingles P. Jones. The series used a familiar western scenario enjoyed by producers of Hopalong Cassidy and The Cisco Kid in which a strong, fearless hero is accompanied by a comic sidekick. During the 1950s, several episodes of the television shows were spliced together and released as 16 feature films by Monogram Pictures. Enjoy 12 of Wild Bill’s greatest radio adventures! 5/27/51 First show in the series
6/3/51 The Missouri Kid
7/29/51 The Shadow Hill Gang
8/12/51 Press for Justice
8/5/51 The Confidence Game
9/9/51 The Trail of Death
9/23/51 A Dangerous Wedding
10/7/51 Mixed Brands
10/21/51 The Mysterious Fist
10/28/51 The Range War
11/4/51 Logging
12/27/54 Silver Dollar Revenge