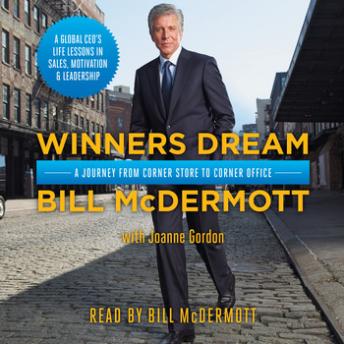 Winners Dream: A Journey from Corner Store to Corner Office

Download or Stream instantly more than 55,000 audiobooks.
Listen to "Winners Dream: A Journey from Corner Store to Corner Office" on your iOS and Android device.

A leadership and career manifesto told through the narrative of one of today’s most inspiring, admired, and successful global leaders.

Growing up in working-class Long Island, a sixteen-year-old Bill traded three hourly wage jobs to buy a small deli, which he ran by instinctively applying ideas that would be the seeds for his future success. After paying for and graduating college, Bill talked his way into a job selling copiers door-to-door for Xerox, where he went on to rank number one in every sales position he held and eventually became the company’s youngest-ever corporate officer. Eventually, Bill left Xerox and in 2002 became the unlikely president of SAP’s flailing American business unit. There, he injected enthusiasm and accountability into the demoralized culture by scaling his deli, sales, and management strategies. In 2010, Bill was named co-CEO, and in May 2014 became SAP’s sole, and first non-European, CEO.

Colorful and fast-paced, Bill’s anecdotes contain effective takeaways: gutsy career moves; empathetic sales strategies; incentives that yield exceptional team performance; and proof of the competitive advantages of optimism and hard work. At the heart of Bill’s story is a blueprint for success and the knowledge that the real dream is the journey, not a preconceived destination.