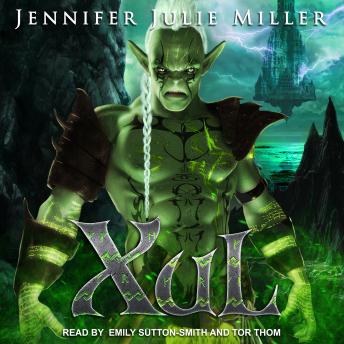 Download or Stream instantly more than 55,000 audiobooks.
Listen to "Xul" on your iOS and Android device.

Awakening in the middle of a nightmare, I realize I'm being sold like an animal to be studied and dissected in the name of science. Tragedy strikes, leaving me abandoned and sick. I am only moments from taking my last breath, when strong arms pull me from the darkness. I thought it was a blessing that he found me, the green man who had haunted my dreams. But what is the old saying? 'Don't count your chickens until they hatch!'

A blood sucking parasite is eating me alive, literally, and no matter what, I'm not going to survive this horror story. He holds me down and I struggle weakly against his immense strength, choking as blood fills my lungs, when I can't fight any more, Death opens its arms and invites me in.

My harsh, brutal features have deterred all females, no matter the species. Then I find her, my Kismet, the only one made just for me. But the fates are cruel, especially to a male like me.

I am being forced to destroy the fragile bond that has formed between us, as I have to make the hardest decision of my life. One that will make me lose her either way. Upon her final breath, I vow not even Death will keep what's mine.