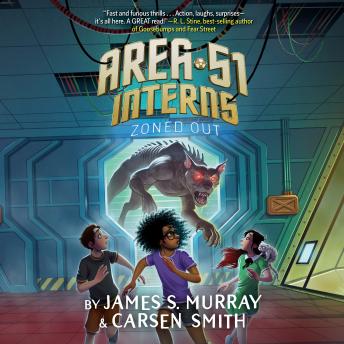 Download or Stream instantly more than 55,000 audiobooks.
Listen to "Zoned Out #2" on your iOS and Android device.

From the mind of Murr from the Impractical Jokers comes a hilarious and action-packed series about a world of bizarre creatures, wacky gadgets, and four kid interns at the most interesting place on Earth: Area 51!

After saving their parents from an alien attack and becoming official interns at Area 51, Viv Harlow and her friends Charlotte, Ray, and Elijah are ready to keep taking down bad guys and helping test all the fun high-tech gadgets. Instead, they all get put on filing duty (bo-ring!) and kept away from the real action. When Elijah discovers a secret Forbidden Zone hidden away on the base, the group jumps at the chance to explore the new place, only to learn it's home to some of the most elusive creatures on Earth. But after the Yeti, Loch Ness Monster, and more terrifying monsters escape, they'll have to prove themselves to their parents and capture the beasts to save the base!

The debut middle-grade series from Murr of the Impractical Jokers and co-author Carsen Smith, Area 51 Interns is filled with enough high-tech hijinks, strange creatures, and laugh-out-loud humor (plus an extra color insert full of gadgets) to make even cryptid skeptics hooked for more!